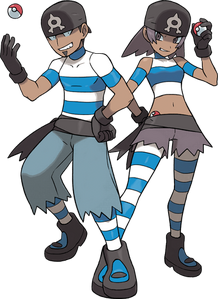 Team Aqua (Japanese: アクア団 Aqua-dan, literally Aqua Gang) is a villainous team from Hoenn. They were founded by Archie.

Team Aqua first appeared in An Unhelpful Hand! when Lexi and Flannery ran into a thief who was chasing an employee of the Devon Corporation to steal the Devon Parts from him in Petalburg Woods. He introduces himself as a member of Team Aqua, before attempting to catch the employee. Lexi and Flannery stopped him before he ran away. As the duo left Petalburg Woods, another mysterious Grunt was hiding and revealed to Courtney that they had to abort their mission and move onto the next one.

The same Grunt appears in One Unexpected Meeting! being chased by May and Brendan after robbing Mr. Stone outside the Devon Corporation. All four Trainers chased the man to Rustboro Tunnel, being stopped once more and giving back the item before escaping.

More members of Team Aqua appear in A Whirlpool Detour! when Lexi and her friends are shipwrecked at Sea Mauville. They arrive at the shipwreck after being sent by Archie to locate a Mega Stone on a mission led by Admins Shelly and Matt, however come into contact with the group who unintentionally interfere. May is attacked by Shelly, but after a small struggle, Shelly is knocked out by Brawly. Matt continues to search with a team to find the Mega Stone, coming into contact with Mudkip and Ralts. Realizing someone else must be searching for the stone, he holds the two Pokémon captive until Lexi appears. Matt takes Lexi to the deck where the others are now being held after they were overpowered by Team Aqua. Matt demanded Lexi give him the stone, threatening to strangle Brendan if she didn't cooperate. When she is about to in order to save Brendan, a Blastoise that was protecting the stone that Lexi had previously knocked out returned in a rage. Realizing they cannot win, Matt orders Team Aqua to abort, taking Brendan and Flannery with them while the others fight off Blastoise to Slateport City.

Matt and Shelly arrive in Slateport City and tell Archie about their failure to acquire the Mega Stone but have got two hostages who are friends with the person who does have the stone. Archie is informed of the Submarine Explorer 1 is near completion, which is needed for their plan. Matt heads into Slateport City and finds Lexi, May and Brawly, knocking them out, before taking them to the Oceanic Museum where the others are being held. Matt threatens Captain Stern for the Submarine Explorer 1 plans but he refuses. Team Aqua's plans are however interrupted when Lexi's Ralts frees the group from their bonds and they begin battling. During the battle, the power is cut out before Archie arrives on the scene with Shelly and various Team Aqua Grunts. Archie speaks with Lexi, and before long manages to take the package from her using his Mightyena. Unfortunately, the team are teleported out of Team Aqua's grip by Lexi's newly evolved Kirlia, leaving Team Aqua with the Mega Stone and depart.

A group of Team Aqua grunts turn up in The Electrifying Savior! when they are abusing Wild Pokémon, only to be stopped by the group once again.

Team Aqua contact Lexi in The Dazzling Recital! after they captured Flannery who was heading to Mt. Chimney to stop Team Aqua's plans there, leading Lexi and Brawly to head off to Mt. Chimney to save her. Team Aqua use a controlled Claydol to cause a sandstorm in the Desert in an effort to stop Lexi and Brawly from interrupting their plans. Meanwhile, Matt interrogated Flannery about what she knows of Lexi and her friends. Back in the desert, Team Aqua attack Lexi and Brawly after they stop the Claydol only for the team to be overpowered when Brendan and May turn up.

The first major step in Team Aqua's plans take place in Race of Mt. Chimney! when Archie plans to use the stolen Meteorite in a machine to destroy Mt. Chimney. Lexi and Archie battle, but Archie is successful in beginning Mt. Chimney's destruction and rushes off. Despite the team stabilizing Mt. Chimney to stop it being destroyed, an Aqua Grunt manages to cause an explosion sending the group down towards Lavaridge Town.

Team Aqua continue with their plans quietly, however, in Hunted Team Aqua had hired hunters to hunt and kill Lexi and her friends, which they're unsuccessful in doing.

In Institutional Takeover!, Team Aqua are discovered to be causing trouble at the Weather Institute, holding several people hostages as they attempt to gather information on the Legendary Pokémon Kyogre and Groudon. The hostages are freed by Lexi and her friends but Team Aqua leave with their gathered intelligence, also revealing their plans to head to Mt. Pyre.

Team Aqua begin their plans to steal the Blue and Red Orbs from the summit of Mt. Pyre in A Haunting Turn!, where they also discover Lexi and her friends are following them. They cast an illusion on Mt. Pyre which causes hallucinations for both humans and Pokémon, including Lexi and her friends. Archie successfully ascends to the summit of Mt. Pyre, and successfully acquire the Blue and Red Orbs from their protectors, before heading off once more.

In The Two Jewels!, Archie gives Maxie false intelligence about the Legendary Pokémon and hand over a fake Red Orb, deciding to call a truce on attacking one another in order to complete their own goals uninterrupted by one another. Maxie seemingly falls for it and leaves Team Aqua in peace, much to the smugness of Archie. Archie then heads to Slateport City with several Team Aqua Grunts.

Team Aqua reappear in A Masterful Choice! when Lexi and her friends enter Team Aqua's Hideout, heading to find Archie. They get to Archie too late as he manages to escape in the Submarine Explorer 1 heading for Seafloor Cavern to awaken the Legendary Pokémon Kyogre. Lexi and her friends give chase but lose Archie, while Marlon battles against Matt but is defeated.

Team Aqua send a swarm of Sharpedo to attack the group in Sharp Attack!.

Archie and Team Aqua arrive at Seafloor Cavern in An Aqua Expedition!, heading in to find Kyogre. Archie is unable to take the mental strain of holding onto the power of both the Blue and Red Orbs, and so sends Shelly to hide the Red Orb away. She is however ambushed by Team Magma's Courtney revealing that Team Magma knew Archie had tricked Maxie with the truce and a fake Orb to placate Team Magma, and that they just allowed Team Aqua to clear the way for them to awaken Groudon. Humilated by her defeat at the hands of Team Magma, Shelly hides the fact the orb was stolen and returns to Archie's side, believing Team Magma's efforts won't be completed quick enough to cause Team Aqua trouble.

Archie finds Kyogre and begins to awaken it with the Blue Orb, only to be halted by Lexi and Calem. Despite defeating him in battle, Archie successfully awakens Kyogre. However, it soon becomes clear to Archie that Kyogre's power is too much to be controlled, and fears what will happen in Kyogre undergoes Primal Reversion. As Kyogre begins to cause havoc on Hoenn, Archie reveals his regrets, claiming he only wanted to Pokémon could live in peace, but that he understands how wrong he was to do so.

Archie is held captive and taken to Sootopolis City by Steven and Wallace, giving Lexi and Calem Aqua Suits to allow them close contact to Kyogre to stop it.

After Kyogre is calmed, Archie reveals his intentions to disband the team, but when Team Magma awaken Groudon, he reveals he cannot stand by and watch Groudon cause havoc, escaping and threatening that he and Team Aqua will defeat Groudon.

In Xenial Destiny: Apocalypse: Kyogre vs. Groudon, Team Aqua battle against Team Magma and Groudon, trying to stop Groudon's attacks on Kyogre and Hoenn. Once Rayquaza stops the quarreling between Groudon and Kyogre, both Team Aqua and Team Magma are disbanded by their Leaders and both the Leaders are arrested.

Retrieved from "https://alexiscooper.fandom.com/wiki/Team_Aqua?oldid=15788"
Community content is available under CC-BY-SA unless otherwise noted.