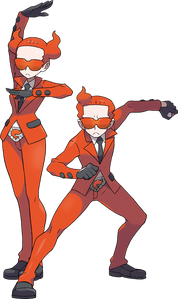 Team Flare (Japanese: フレア団 Flare-dan, literally Flare Gang) are a villainous team based in Kalos. They were founded by Lysandre.

Team Flare appeared throughout the Xenial Destiny series, appearing in several places throughout the Kalos region. At first, it was believed the team was a small group of Trainers who wanted to cause trouble in Lumiose City, however, as criminal activity began to spread throughout Kalos it was discovered the group was a much bigger organization. Lysandre didn't reveal his place as the Team Flare Leader until it was absolutely necessary, covering his schemes with the Lysandre Labs company. The initial goal of Team Flare was to create a "beautiful and better" world while making money, eliminating everyone who do not follow their standards. However, it soon unraveled that Lysandre was using this as a cover for his true intentions; to fund a project to launch the Ultimate Weapon to wipe the earth of both humans and Pokémon. After Lysandre is presumed dead initially, many of his followers and workers defected from the Team, including several Admins. After many were arrested, the team was disbanded.

After Lysandre returned, it was revealed that he had continued to rebuild Team Flare. Despite his best efforts, upon his arrest, Team Flare disbanded - this time for good, at least until Lysandre was released.

Retrieved from "https://alexiscooper.fandom.com/wiki/Team_Flare?oldid=15787"
Community content is available under CC-BY-SA unless otherwise noted.