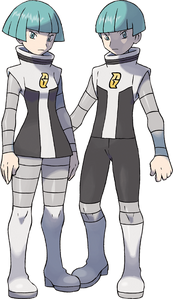 Team Galactic (Japanese: ギンガ団 Ginga-dan, literally Galaxy Gang) is a villainous team based in Sinnoh. The team was founded and led by Cyrus.

While asleep following her recovery from a coma, a bunch of uniformed men stole Alexis's body from her home in Sinnoh. Knowing all about the story of Team Plasma and Alexis, Team Galactic Leader Cyrus began to fill Alexis's head with fake stories telling her she had loyalty to Team Galactic, and that they were the company she had been with for a long period of time. Alexis, not knowing otherwise, believed this and became a senior member of Team Galactic. For the next few years, Alexis caused havoc in the Sinnoh region; and ultimately saw her demise as a Team Galactic member when she was defeated by Ash, and two friends, Dawn and Brock. Alexis found that she was the sister of Dawn, and that she was kidnapped by Team Galactic several years before. This revelation resulted in her finding that Cyrus had lied to her, and managed to defeat him with the help of Ash, where he was sent to the Distortion World. Alexis then cut ties with Team Galactic, deciding to start her own Pokémon Trainer Journey alone. Team Galactic seemingly went into hiding following this event.

Retrieved from "https://alexiscooper.fandom.com/wiki/Team_Galactic?oldid=15795"
Community content is available under CC-BY-SA unless otherwise noted.