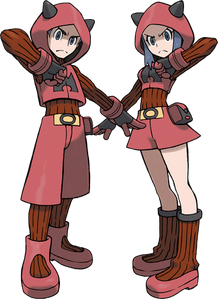 Team Magma (Japanese: マグマ団 Magma-dan, literally Magma Gang) is a villainous team from Hoenn. They were founded by Maxie.

Team Magma first appeared in Magma Meeting in Meteor Falls! when Maxie and several Grunts turned up at Meteor Falls to oversee what Team Aqua's plans were. They reveal themselves both to Team Aqua and Lexi and her friends, announcing themselves as rivals of Team Aqua.

Team Magma didn't appear again until The Two Jewels!, when Maxie meets with Team Aqua's Leader Archie. Archie gives Maxie false intelligence about the Legendary Pokémon and hands over a fake Red Orb, deciding to call a truce on attacking one another in order to complete their own goals uninterrupted by one another. Maxie is aware that it's a ruse by Team Aqua to get them off of their backs. Maxie goes along with it, privately working on their plans.

Courtney ambushes Team Aqua's Shelly for the Red Orb in An Aqua Expedition!, revealing that Team Magma knew Archie had tricked Maxie with the truce and a fake Orb to placate them, and that they just allowed Team Aqua to clear the way for them to awaken Groudon. Courtney then heads to another area in Seafloor Cavern where Maxie was waiting for the Red Orb to be delivered to complete their plans.

Team Magma wait and allow Team Aqua to awaken Kyogre, as Maxie has definite doubts that Archie would be able to control Kyogre and will have to turn for help from others to calm it down. He was correct, and so Maxie awoke Groudon. However just like Archie, he found out that he could not control Groudon and instead watched Groudon escape and head to fight against Kyogre.

Retrieved from "https://alexiscooper.fandom.com/wiki/Team_Magma?oldid=15790"
Community content is available under CC-BY-SA unless otherwise noted.